This Lake is huge, it’s deep and full of fish…

On the map to the right, Lake Pend Oreille looks like an ear, or perhaps a question mark missing the dot. Not that you can really tell much about its shape when you’re down on the water. It’s simply too big to discern much more than water, sky and mountains. How big is big? Well, for instance, the 43-mile-long lake is nearly as long as Lake Ontario. At its greatest girth, the lake is just over six miles wide. And in one respect it outdoes all but four lakes in the nation: It’s a whole lot deeper. 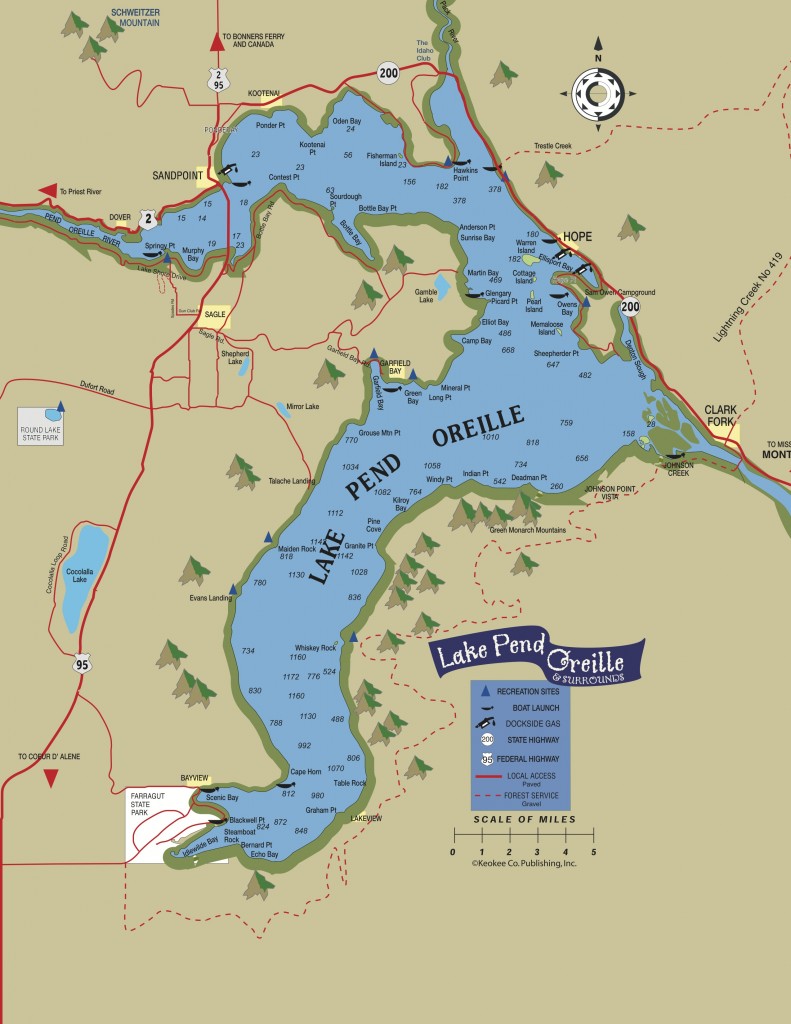 In fact, when we say our lake is deep, we mean it is deeper than the famous Loch Ness. The U.S. Navy didn’t choose to test submarines at Lake Pend Oreille for nothing. It is even rumored that the Navy once lost a submarine in the deep, dark waters. At 1,158 feet deep, it’s the fifth-deepest lake in the nation. The United States Navy still continues to perform tests in Lake Pend Oreille from its Acoustic Research Detachment at Bayview.

Many visitors to Lake Pend Oreille are captivated by its rugged beauty that surrounds it’s 111 miles of shorline. The exceptional beauty comes courtesy of the surrounding mountain ranges that, in areas, seem to plunge straight up out of the depths of the lake. The three major mountain ranges that surround the lake are the Selkirks to the north, Coeur d’Alenes to the south and Cabinets to the east.

Lake Pend Oreille lies within the Purcell Trench, a chasm in the Rocky Mountain chain that stretches a couple hundred miles from the Idaho Panhandle well into Canada. This steep-sided valley was created by forces deep in Earth’s crust hundreds of millions of years ago. Sediments in a vast seabed from the obscure past buckled and rose, forming the ancient mountain range of the Cabinets. Then igneous intrusions pushed their way to the surface and in a cataclysm of mountain building, the Selkirk Mountains were born around 135 million years ago.

The narrow valley embraced by these two mountain ranges became the perfect home for big rivers and deep lakes. At its south end, the stage was set for a water event of gargantuan proportions, now known as the Ice Age floods. Thousands of years ago the Idaho Panhandle was covered with ice. The Purcell Lobe of the continental ice sheet was as much as 2,000 feet thick at the mouth of the Clark Fork River. An immense lake that filled the valleys of western Montana was created. When that ice dam melted and collapsed, reportedly over and over again, 10 times more water than what flows in all the rivers of the world today rushed into the abyss that now cradles Idaho’s most precious gem. Lake Pend Oreille is a remnant of the former glacial lake that preceded it, but Pend Oreille is no less spectacular, no less beautiful than its ancestor, Glacial Lake Missoula.

The Kamloops trout is actually a Gerrard rainbow, first stocked into the system in 1941. The Gerrard is a long-living wild strain of rainbow native to the Lardeau River which flows into the Kootenay Lake in Canada, just north of the United States. The Gerrard is well adapted to the cold waters of Pend Oreille and spawns successfully in the wild. 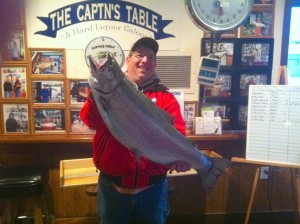 Cutbow’s, a cross between a cutthroat and a rainbow can also be found in Lake Pend Oreille. The largest cutbow taken in Idaho was a 24-pounder caught here in 1991 by Irwin Donart.

One reason these fish got so big was the abundance of kokanee, a small variety of landlocked sockeye salmon commonly called “bluebacks” or “silvers” that are the prey-base in their food chain. At one time the abundant kokanee fishery in Lake Pend Oreille, which numbered millions of fish, attracted anglers from far and wide with daily catch limits of 25 kokanee per person. Those days deminished due to habitat problems and prey-predator imbalances in the lake, and fishing for kokanee was banned for several years.

For kokanee, it should be noted that over the past few years, a huge effort has been taken by local anglers, Idaho Fish & Game and the Lake Pend Oreille Idaho Club (LPOIC.org) members to establish a more balanced predator-prey relationship by removing the mackinaw trout who primarily feed on the kokanee population. The year 2010 proved to be a turn-around year for the kokanee. In the last week of November 2010, 7.5 million kokanee eggs had been harvested and were being raised in fish hatcheries for release in the coming years. Record number of kokanee were counted in their spawning grounds in gravel beds along Lake Pend Oreille and many streams contained thousands of spawning fish, recognized by their beautiful red color. Kokanee have been re-established and angler’s are now allowed a six fish bag limit. 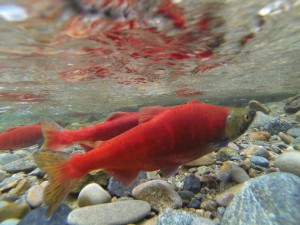 For shoreline fishing on Lake Pend Oreille, many species can be found including crappie, perch, pumpkinseed, bass, bullheads, brown trout and cutthroat.

Pend Oreille was one of the last few lakes in the interior United States where it was still legal to catch bull trout before that species was listed as threatened under the Endangered Species Act; fishing for bull trout is no longer allowed.

Pend Oreille holds the record for the bull trout with a whopping 32-pounder caught in 1949 by Nelson Higgins.

As for whitefish, Pend Oreille has two varieties, both very good for eating. The Rocky Mountain whitefish, the smaller of the two, is generally found in water less than 50 feet deep. In the winter, you’ll find this variety west of the Long Bridge.

The second variety is the Lake Superior whitefish, introduced here in the ’30s. Some will argue they are the best tasting fish in these waters; superb eating, very meaty with few bones and firm flesh; but probably the least fished-for of all the lake’s species. They swim in large schools and at depths between 80 to 200 feet. They range in weight from 2 to 7 pounds, and feed primarily on plankton and mysis shrimp (as do the kokanee).

Lake Pend Oreille also has smallmouth bass. They love rocky underwater ledges, and those who are in-the-know fish for them along the Green Monarchs. But no matter where you fish in Lake Pend Oreille, it’s a good bet you’ll have a great day on the water!